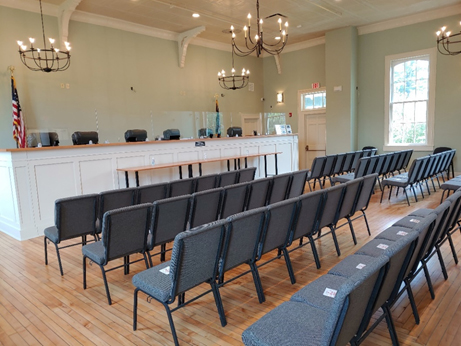 The Philipstown Justice Court recently underwent a renovation our of entire building, which also serves as the Town Hall.  The building was built in 1867…needless to say, the renovation was welcomed!  The renovation took place from September 2019 through April 2021.  While the work was being performed, the Court was moved to a temporary space at the local American Legion Hall.  What a HUGE project that was…packing the ENTIRE Court to move, unpacking, packing again and unpacking again…all through COVID.  Although, it was all worth it in the end!  We have a great new space and Courtroom.

We have the JCAP (Justice Court Assistance Program) Grant to thank for providing funds to help with some of the Court improvements.  Luckily, I was successful in writing/receiving the JCAP Grant for the last few years, totaling over $28,000. and recovering an additional over $8,000. from an old grant.  In the 2020/2021 grant cycle, the Philipstown Justice Court was one of only 187 Justice Courts that had been awarded the grant out of over 1,200 Justice Courts in the state. The funds received have helped with many of the changes and improvements.

Did you know? Since the establishment of  JCAP in 1999, Justice Courts have been awarded over $35 million in resources and equipment.